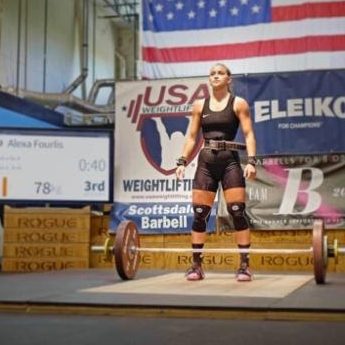 Like many members of our Tribe, I am grateful to CrossFit and Weightlifting for many things. Most of all, I’m grateful for how CrossFit taught me to change the way I feel about my body, which is something I don’t talk about a lot. The more people (especially women) that I’ve spoken to, the more I’ve realized how common having a negative body image is. National Girls & Women in Sports Day is this month, which inspired me to talk about the deeper love and respect I have for the barbell.

When I found CrossFit in 2009, I was an 80lb 14-year old girl who struggled to love my body. I am so thankful I found CrossFit at a young age. Not only as an athlete, but as a young girl who hadn’t learned to appreciate her body, or what it could be capable of. I learned how to be motivated by how much weight I could lift each day, rather than how much I weighed on the scale, which also taught me how to eat for performance instead of eating to try and look a certain way in the mirror. I was lucky enough to have incredible coaches from the start who not only taught me how to move correctly, but how to become mentally and physically more confident as well. I have been inspired ever since to become a coach and hopefully be able to help others feel the same way about themselves.

In 2012, The CrossFit Games wrote an article about me because at the time, I was one of the youngest athletes signed up for the Open. They titled it, “Trading Skinny for Strong: Alexa Fourlis”. This was the first time I had shared my story on a larger platform, and it was terrifying, but also rewarding to see how many people responded with similar struggles and how CrossFit had healed them as well. In that article, they referenced a report by the American Association of University Women. It found that teen girls tend to base their self-worth on their perception of how they look rather than their abilities. Girls are nearly twice as likely as boys to mention a physical characteristic as the thing they like most about themselves, whereas teen boys tend to base their self-worth on what they can do.

For decades, the fitness industry has offered women ways to alter how they look, but not what they’re capable of. CrossFit was designed to shift the focus from appearance-based measures of fitness to performance — to the benefit of all people and particularly teen-age girls. We all have different motivations for why we choose to CrossFit. I know I have loved this style of training for so long because of what it has taught me about myself. I found my true love, the sport of Weightlifting, through CrossFit. I love to compete, and I crave that adrenaline rush on the platform, but my respect and love for Weightlifting will always be much deeper than that. For me, training isn’t just about competition, nor is it about being on top of the leaderboard or looking a certain way. It’s about what makes me feel like the best version of myself every day.